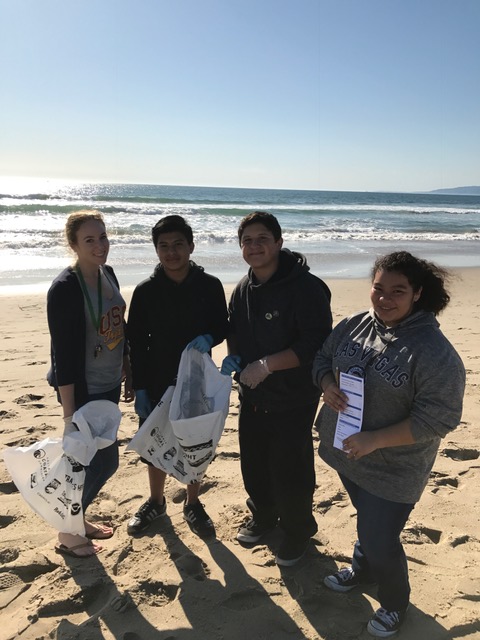 We did our beach cleanup on March 1st, 2017 and there were about 30 Luskin students who went to the cleanup. First, we got picked up by the bus and had a lovely ride down to Venice Beach which we adopted as the group’s beach. When we got there, we were greeted by a Heal the Bay member who walked us through what we should do. We were all separated into small groups of three to cover as much ground as possible. 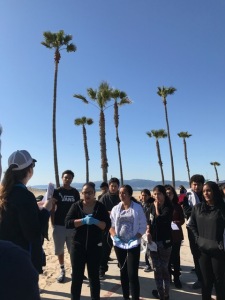 Heal the Bay meets Nature’s Own Club at Venice Beach

In my little team of three, with my peers Evelyn M. and Katherine E., we all had different roles assigned to each. Evelyn was in charge of collecting the data for the first half an hour of the beach cleanup. Katherine was in charge of picking up the trash while I held the bag. We rotated tasks at least 3 times to have an equal chance at each role. After a cool two hours of this progress, we threw away what we had collected and turned in our data sheets so that Heal the Bay can have data on the kind of pollution contaminating our beaches.

My team mates and I played music while we were cleaning up which made the whole clean up a very memorable experience. Since my friends are a group of varied characters, some of them took pictures of the beach and others of themselves which was kind of funny. A funny thing that happened was that my teammate Katherine tried to do a cartwheel at the beach and failed miserably which was fun to watch.

A lesson that I learned was to not take paper cups and plastic cups to the beach and instead use Tupperware if we are bringing food from home. I also know to bring the least amount of supplies to the beach so that nothing gets left behind.

Many of my teammates were very excited to go to the beach and help the environment, even if it was just a small gesture. It made us feel like we can make a difference even if it’s only in small steps. We felt like we succeeded at preserving our beach. Many were surprised that it was so clean; we thought it would be filthier but we felt good about our contribution.

As a club, we try to keep our campus clean as well as our community. We have tried to collect bottles and such to turn into recycling due to so much of them going to waste when unconsciously thrown into the trash. We want to reduce the amount of waste we produce as a school. The club also tries to go to environmental fairs to educate our members and our students as well. We invite the whole school to beach cleanups so that they can also make a difference when it comes to our environment. We plan to expand our horizons with new members and get more collaboration from like-minded individuals.