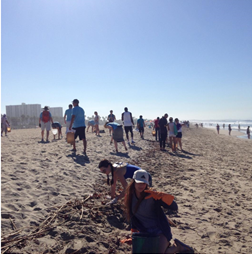 On Saturday, September 20th 2015, Team Marine members attended Coastal Cleanup Day hosted by Heal the Bay. They,  along with a large group of peers spent three hours scouring the area between lifeguard stations twenty and twenty-seven for trash.

The most aggravating aspect of this event was the blatantly negative impact of humans on the environment. After the first rain of the season it was particularly easy to see the sheer quantity of items people in our community have carelessly discarded. The sand and sea were overwhelmed with littered cigarette butts, Styrofoam chunks and plastic straws. Each of these items were broken into tiny pieces and scattered along the shore. Completely clearing one square meter of space could take fifteen minutes!

While this injustice was disgusting in aesthetic, what is most concerning is that we could not pick up every piece. Many of the pieces were miniscule, making them impossible to locate and easy for marine organisms to accidentally consume. The toxic chemicals in litter, specifically plastic particulates, will surely cause a rift in the marine ecosystem; and therefore the biodiversity and food it currently provides.

While this realization may have caused some dismay, this event was personally motivating because we were able to be part of the mitigation of the issue of plastic pollution. The issue itself has been discussed on many occasions, and it was of course reaffirmed in the emails preceding the event. However, this event was crucial in the way that it allowed people to see firsthand the effect of humans on the environment. A large part of achieving environmental peace is moving towards sustainable habits, and the things we saw at this event were definitely motivators for change.

One thought on “Team Marine Reflects on Coastal Cleanup Day”